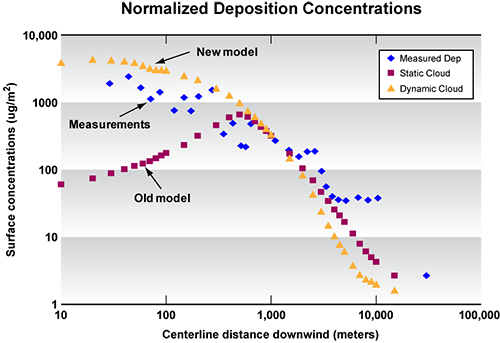 Comparison of NARAC predicted and measured ground deposition as a function of downwind distance shows the improvement produced by the use of a dynamic cloud rise algorithm rather than a static cloud model. (Courtesy of Kevin Foster)

Modeling of radiological dispersal devices (RDD) requires dispersion models that treat a variety of radionuclides, material types, and particle sizes. NARAC develops more accurate near-source and downwind RDD models are developed through the use of the latest experimental data on explosive dispersal of materials. Examples include:

NARAC’s Aeolus model can operationally simulate dispersal from an RDD in an urban environment. Video is of a hypothetical simulation of urban release.